Home » BLOG » MEXICO » Our Experience Housesitting in a Small Town in Oaxaca, Mexico 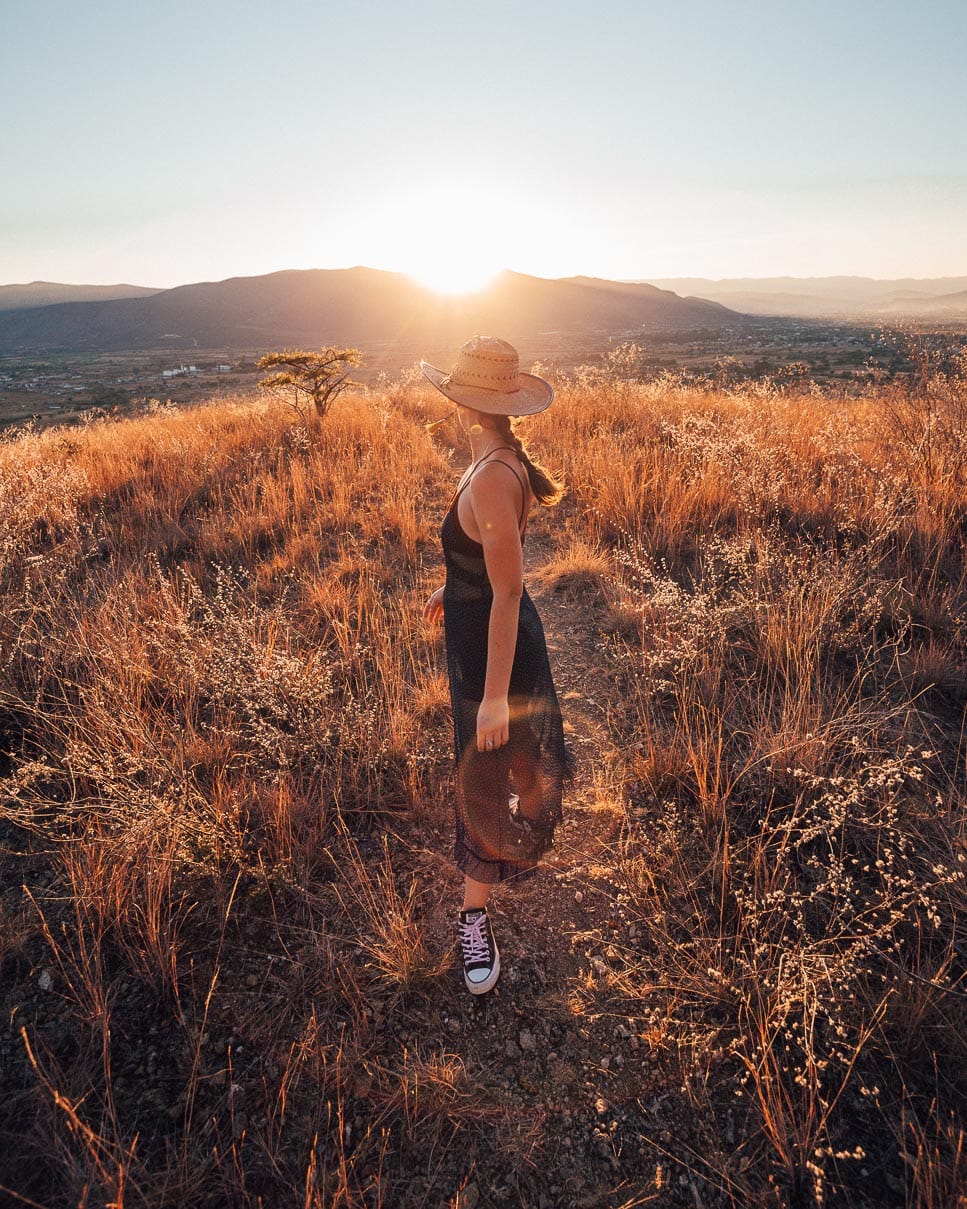 We recently spent six weeks housesitting in Oaxaca. We were in Lachigolo, a small dusty town of 1,900 people about ten miles (20km) east of Oaxaca City. After seeing an ad online we jumped at the opportunity. The woman subletting the home responded quickly, and after a brief meeting and tour of the house, we were given the keys to our new temporary home.

The nice thing about living in Mexico is that short term rentals are the norm. You don’t have to worry about long leases unless you really want one. It’s easy to find something for just a month or two. The flexibility is contagious! You start to think, “okay I’ll live in the city for two months, go to the coast for another month, and then I’ll go spend some time in the mountains.”

We weren’t really sure what to expect, or whether we’d even like it. But our time in Lachigolo took us by surprise and it taught us a lot. We wanted to document our experience to remember the quirks and details that made us love it there. In the event that you’re considering living in the countryside of Oaxaca, this will give you a taste of what it’s like… 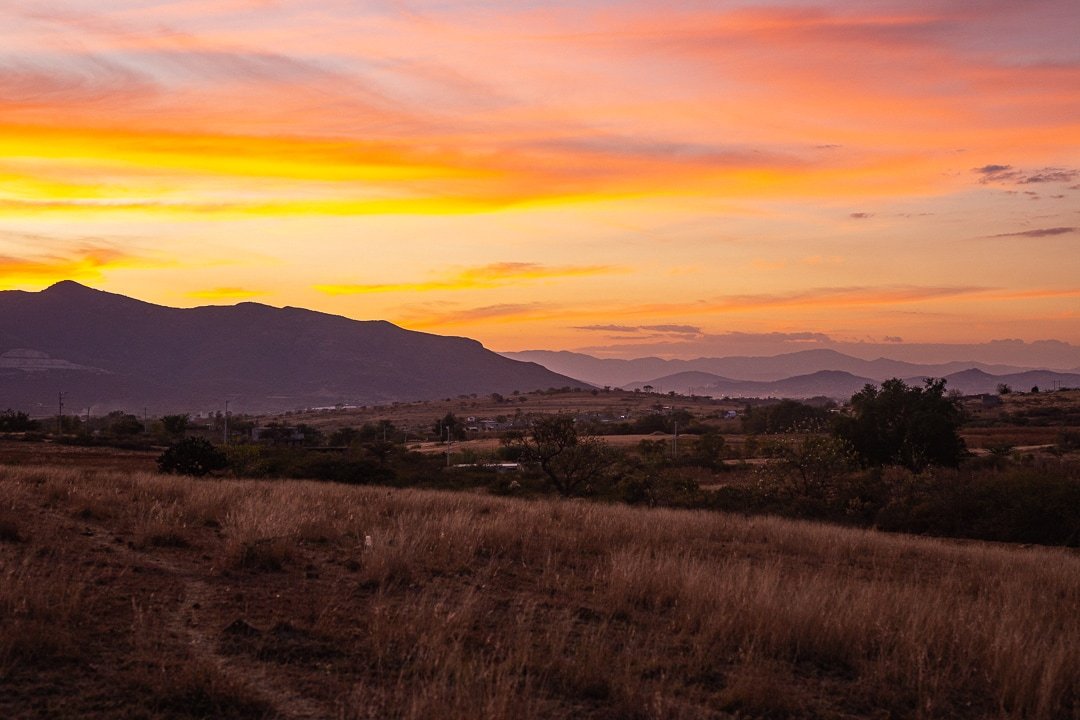 Lachigolo is a small sleepy town, no one is in a hurry, and people have the time to talk and say hello. Things move at a slower pace which we’ve learned to appreciate as slow travelers.

By Mexican standards, it’s much quieter… as long as there isn’t a holiday. Then you might hear fireworks all night. Even so, there’s far less noise than in Oaxaca City. No street parades or noisy gas trucks going by! One of the best parts about being out in the country are the sounds of nature you get to hear. The birds chirping in the morning, the goats bleating in the afternoon, and the cicada insects at night.

When you’re further away from the city you can more easily manage your social engagements. It’s less distracting. Meeting up with people takes more effort (which isn’t the worst thing if you’re an introvert). By virtue of it being more inconvenient, you’re more selective about what you do. It makes it a special occasion, which helps you appreciate it more. In this busy fast-paced world we live in sometimes you have to find refuge from it to do your work and tap into your creativity.

Nature at our doorstep

Being out in the country for a while was conducive to productivity, but sometimes we needed to get out of the house. Luckily there were several dirt trails nearby. Nature was easily accessible out there. A simple dip through a barbwire fence and you’re off, walking amidst the desert landscape towards the Sierra mountains. It was especially beautiful near sunset!

We decided to climb the highest mountain behind our house one day. It was steeper than we anticipated, but solid exercise. We undershot the amount of time it would take to get up there and ended up scurrying down in the dark. Not the smartest choice, but worth it for the view of Oaxaca City nestled in the valley.

Looking for more nature in Oaxaca? The Best Beaches in Puerto Escondido

When you can housesit or rent a home for $200 a month it opens up a lot of possibilities you wouldn’t have otherwise. Think of what you could accomplish if your rent or mortgage was a fifth or even a tenth of what it is now? You suddenly have more free time for your endeavors. You can save more money and not feel guilty about reading a book on a Wednesday afternoon.

While housesitting in Oaxaca, on average we were spending about $50-80 every two weeks at the supermarket in the city, and an additional $20 a week on fresh produce in Lachigolo. We didn’t have a washing machine, but who cares when you can get all of your laundry done for $5-6. High-speed internet is run by a local guy with a huge antenna on his roof, not Comcast or some other giant corporation. That’s always a plus! It cost only $20 a month.

The casita we stayed in was mostly off the grid. It had 24-hour solar-heated water. We had a compost pile for our food waste that was reused in the garden. We burned our paper trash about once every ten days. Because getting rid of trash was inconvenient, it really made us consider the items we purchased, especially the plastic products we bought. We ended up with only two small trash bags after six weeks. You learn to manage. You make do with less.

It also made us more mindful of our water consumption. Using well water and living in a dry arid valley like Oaxaca means that it becomes an important consideration. If it’s yellow let it mellow, if it’s brown flush it down, know what I mean? We also didn’t take daily showers, especially if we weren’t leaving the house.

No car, no problem

Not having a car meant less driving and a smaller carbon footprint. It was a 5-10 minute walk into town for simple needs, fruits and veggies, and the occasional six-pack. We usually wore a backpack or brought a reusable bag with us.

The public transport in Lachigolo is surprisingly good. A bus ride into the city was 10 pesos (50 cents). A short ride in an auto-rickshaw or a colectivo for both of us was around 15 pesos (75 cents).

Whether it’s being invited to local fiestas or cookouts there’s usually something to do. Mexicans love to get together and always find a reason to enjoy themselves. We became friendly with several guys we met at a dance, and in a small town, you tend to see the same people again and again. They were inviting us to various occasions every week, we didn’t always go, but when we did they were gracious hosts.

We ran into Miguel on Christmas Eve and he invited us to his Christmas celebration where they barbecued a goat in an underground pit. It gave us the chance to practice our Spanish, share laughs, and even a few dances. We met another cheerful man with grey hair and a scraggly beard who went by the name Ponchito. He was always smiling and often stopped on his dusty motorcycle to shake our hands whenever he saw us around town. Who does that anywhere else?

The land our colorful house sat on belongs to a short jovial man, affectionately known as the Don. He’s the head of the local ejido in Lachigolo. The property includes four houses, one that he lives in, and three others that are rented by expat couples, including the two-bedroom house we were watching.

It’s a small community of foreigners that have some pretty great stories. It’s nice to know the neighbors are around if you ever need something. We all had a Christmas potluck and New Year’s bonfire party together.

One American couple came to Oaxaca from Alaska because they were tired of the snow. Another friendly couple was from Quebec. They all own converted vans or RVs that they use to venture around Mexico. You could definitely do worse in retirement!

One thing we had to get used to were the spiders and scorpions. There are only a few types of spiders that you need to watch out for in Mexico and we found them all at our place. They are Black Widows, Brown Recluses, and Horned Spiders. Thankfully, most of them only bite when you disturb them.

On the other hand, Wolf Spiders are your friends. They eat the bad spiders, so we let them hang around and have a beer. Luckily, we only saw two scorpions in six weeks. The funny thing is that they were both on our very first day at the house. They came out in a welcome wagon to say hello to us as new guests. Still, we got into the habit of checking our shoes before we put them on, and even checking the bed as a nightly routine.

The street dogs in town are friendly for the most part, especially if you feed them every once in a while. When a bag of dog food costs a dollar it’s easy to lend a helping hand. A few local dogs became quite fond of us. One funny dog would wiggle out of his fence and walk up to us every time we passed his house.

We had to be careful not to get too attached. It’s easy to do. Especially when we’re used to traveling all the time and can’t have pets of our own. One of the couples we met came to Mexico with no animals and ended up with three dogs and two cats!

It’s fascinating how quickly you can get used to a place. Within a few days, you cling to the comfort of familiarity. The walks to the produce market, knowing where everything is arranged at the convenience store, the tlayuda stand that you’ve grown to love, the jagged pattern of the mountains.

After traveling for years, you end up with these random places around the world that mean something to you. Little corners of the Earth that you once called home, if only for a short time. It keeps life interesting and the memories made will last a lifetime!

After six weeks we were sad to leave, we ended up enjoying our time in Lachigolo more than we anticipated. But alas, nothing lasts forever and we’re always ready for the next adventure. For now, we’re excited to be moving into our new apartment in Oaxaca City, but we can see ourselves returning to rural life again someday.

Why not experiment with different lifestyles? It’s a process of learning and exploring that we’ve grown to love. It helps us live in the present and not take things for granted. Because at the end of the day our experiences and knowledge are the only things that can’t be taken from us.

Have you ever tried housesitting before? If so, where?

Co-founder of Why We Seek. Blogger/Photographer/Foodie. Currently home in Denver and gearing up to travel again. Follow us on Instagram @whyweseek