THE MAGICAL MONASTERIES OF LADAKH

There is an endless number of monasteries in Ladakh. Often set in remote locations on rocky mountainsides, across high mountain passes, exploring them feels exhilarating. Like you’re in a mysterious world that time has forgotten.

Also known as ‘gompas’ some are still actively inhabited, while others lay in ruins. Each one has it’s own unique attributes. An architectural and cultural feature of the region, seeing these monasteries is a highlight of any journey to Jammu Kashmir.

Adorned with wood carvings, spiritual art, and ancient relics, you’ll learn a lot about the cultural history of Tibetan Buddhism and the exiles who have been forced from their homeland due to the ongoing Chinese occupation.

Many of the monasteries even offer overnight stays for those who want to soak in the serenity. You can’t possibly see them all on one trip, but here are the monasteries of Ladakh you should try to see…

Gelukpa monks (yellow hat sect) built this Tibetan Buddhist monastery in the 1400s and it’s the largest monastery in central Ladakh. Thiksey is known as the “Mini Potala” because of it’s similar appearance to the Potala Palace in Lhasa, Tibet.

It contains a 15m (49ft) Maitreya Buddha statue that is apparently the most photographed Buddha in India. It was built to commemorate a visit by the Dalai Lama himself. The monastery houses over one hundred monks and the grounds include a school for the young novices. It’s also possible to stay here, just ask the office for availability and pricing.

If you’re an early riser, don’t miss the morning puja when monks blow horns from the rooftop around 7am. Afterward, head down into the assembly hall for a free cup of Tibetan butter tea while listening to the monks recite their morning mantras. Very atmospheric and peaceful!

There’s also a nunnery, a temple devoted to the goddess Tara, a protector temple, stupas, and loads of Tibetan Buddhist art. Definitely a must while in Ladakh! Photos are okay without flash.

Shey Palace is located along the Leh-Manali highway between the city of Leh and the Thiksey Monastery. Built in 1655 this palace was a summer retreat home for the former Ladakhi king.

Like most of the monasteries in Ladakh, you’ll have to hike uphill to reach it. While the palace itself isn’t in the best shape, it’s still worth a short visit. Sit on the back patio of the complex facing toward Leh in the morning for a tranquil moment.

Padmasambhava was believed to have meditated here in the cave this temple was built around during the 12th century. Adding to the mystique of being inside this monastery, is that you’ll likely be alone.

If Takthog is not open when you arrive, visit the monastery up the hill on the left side of the road. There is likely a monk there who has the key. Unfortunately, no photos inside the cave. So you’ll just have to experience it in person! Donations are welcome.

Traveling to Ladakh? Read next: How to Trek Markha Valley Without a Guide

Chemrey Monastery also called Chemday Gompa, combines well with a trip to Takthog Monastery. Perched on a hill like an ancient castle, it has a very isolated feeling that makes it special.

There are great views of this monastery from a distance, ask your driver to stop for a few shots from the road when driving up to it. Again, there’s hardly any people and the views from the roof are exceptional!

There’s also a museum housing many relics, the most famous being Buddhist manuscripts written with liquid gold and silver. Unfortunately, they don’t allow photos inside the museum.

Set between the banks of the mighty Indus River and the Stok Range of the Himalayas you will find Stakna Monastery. Built in the 16th century, Stakna translates to “Tiger’s nose” as the hill it sits on resembles the nose of a tiger.

We were fortunate enough to meet the young lama who lives there, he’s believed to be a reincarnation of Gautama Buddha. If you go, try to say hello and receive a blessing from him. It seems this monastery receives far fewer visitors than others, which is a shame because of the unusually colorful interior, and the chance to meet the lama.

*We hired a private taxi for 2800 rs, split between four people to visit the five monasteries above in one day. We did Shey, Thiksey, Chemrey, Takthog, and Stakna in that order. You can find drivers congregating every morning at the Leh polo ground.

Tucked back into the hills you would never even know it’s there until it suddenly appears. A Tibetan Buddhist monastery of the Drukpa Lineage, it’s located about an hour’s drive from Leh on the way to Manali. This monastery also has a guest house.

It was completed in 1672, but has been known to exist as far back as the 11th century and is a fine example of Tibetan architecture. Infamously while Nicolas Notovitch was at Hemis Monastery nursing a broken leg, he claimed to have found a manuscript indicating that Jesus Christ visited Hemis to study with Buddhists and Hindus during his lost years.

A very detailed museum is located under the gift shop and that might be the best part of your visit. It’s full of an incredible collection of antiques, masks, and artifacts from both Ladakh and Tibet. One of the strangest items is the human skull of a monk, made into a bowl.

The Hemis Monastery Festival is held annually in June. This might be a great time to go! Witness the massive celebration to commemorate the birth of Guru Padmasambhava. It’s one of Ladakh’s largest cultural events. 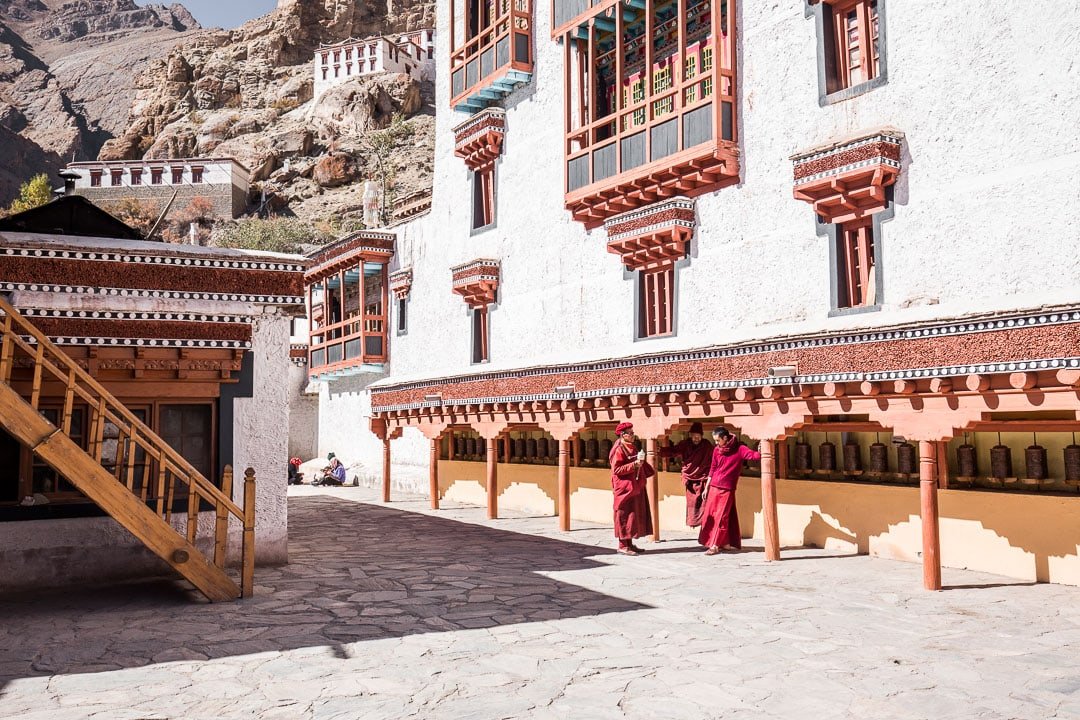 High above Leh Palace, you can see the bright white Namgyal Tsemo Monastery and fort almost anywhere in town. It’s a bit of a slog to hike up from old Leh, but it’s the best place to get those sweeping views over the city. Bring a string of prayer flags with you and tie them on as a wish for peace in the world.

Sit quietly for a few minutes, take in the views, and feel the stillness! Note the monastery is often closed, but the fort is usually open. 20 rs for entry. 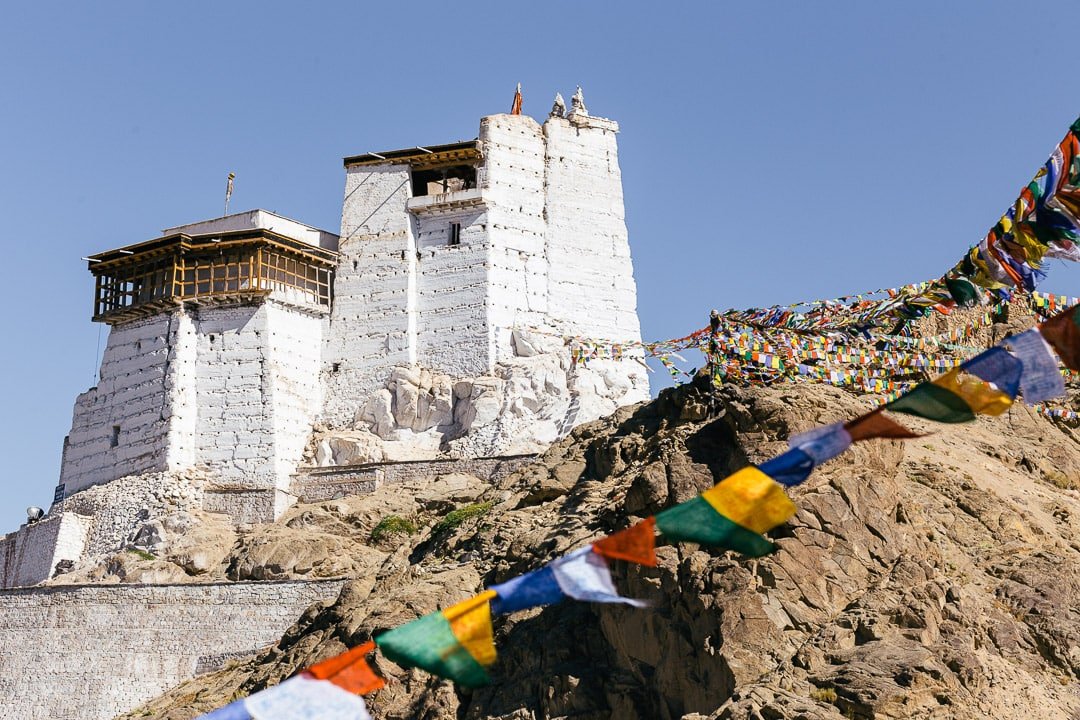 More India photos? 29 Photos of India in Black and White

Located 4.5 hours from Leh via Khardung La pass, this is the oldest and largest monastery in Nubra Valley. Founded in the 14th century it is a sister to Thiksey Monastery belonging to the Gelugpa monks (yellow hats) of Tibetan Buddhism.

The monastery has about 100 resident monks and a school run with assistance from an NGO, that teaches science, English, and computer skills to children.

Combine the Diskit monastery with a trip to the giant statue of Maitreya Buddha (32 m/106 ft tall) which faces Nubra Valley. Thus, it’s facing towards Pakistan as a symbol of peace. If you’ve got the time, walk back to town through the village of Diskit, for a glimpse into the local life.

If you still want to see more, you certainly can. Another one we didn’t get the chance to see, was Lamayuru Monastery. We heard many good things about it and the scenery looks absolutely majestic. Oh well, all the more reason for us to return to again someday. We loved the time we spent at the monasteries of Ladakh. There’s really nowhere else like it. If you’re curious about Tibetan culture, just go, it has to be seen to be believed.

Have you visited monasteries anywhere? Can we help you with more info? Let us know in the comments…

Co-founder of Why We Seek. Blogger/Photographer/Foodie. Currently home in Denver and gearing up to travel again. Follow us on Instagram @whyweseek